[Hillary Clinton] I’ve been in this game too long
I’m a public servant
Have been since I met MLK in person
I’m a woman of the people, that’s for certain
You’re a man of the people who don’t like turbans
I was living in the West Wing while you were professional wrestling
You got skin like Russian dressing

From too much Russian investing
You been going bankrupt since the 90’s
If I was in Iran, you couldn’t find me
You don’t care about the job, Trump
You just think the desk is shiny
I said that I respect your children
But that wasn’t quite right, yo
Looking like some extras from American Psycho
First name is Hillary, middle name, Rodham
Last name is Clinton and lyrics, I got ’em
You fire celebrities on The Apprentice
Motherfucker, I fire bin Laden! (Crack!) *coughs*
How do I say this? You’re racist
Ooh, you must get so pissed that your hands are too small to stop and frisk
So you use your fingers to touch chicks
(She’s only 12 years old)
That’s enough, shit
(But she’s married, sir)
Just gotta get pushy
(That’s your daughter)
Well, grab her by the pussy
That’s assault, brotha!
Don’t tell me the victim’s at fault, sucka!
You don’t know shit about steaks, yucka!
But the ones on the 8th are great, muthafucka!
Better save the date, I’m gonna rock the vote
Bad bitch on the scene like Murder, She Wrote
So go ahead Donald, let me see your flow
I brought Michelle’s speech, borrow some quotes [Donald Trump] Let me just say I respect all females
But your rhymes are trash
Put ’em next to your emails
Our country’s in crisis
Who wants to vote for the mother of ISIS?
That might not be exactly true
But I don’t do politeness
You wanna talk about misogyny? 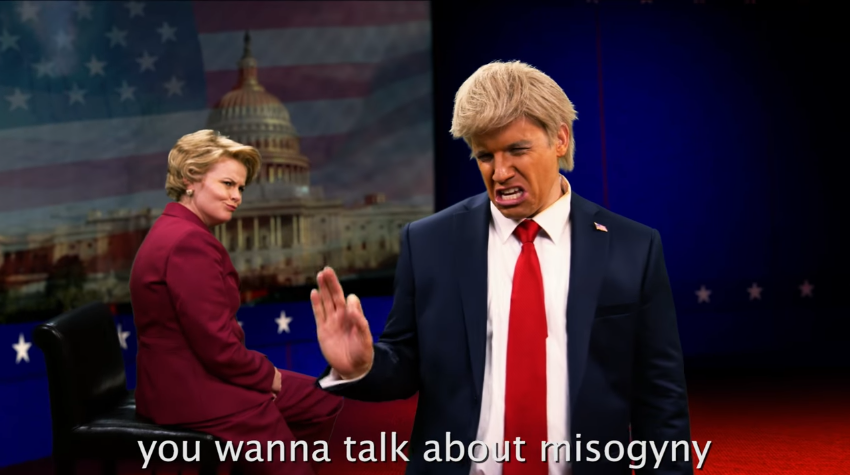 Your Bill’s worse than Cosby
He left a mess on that dress
Like you left in Benghazi
You wanna break the glass ceiling, Hillary, I sense it
But the only crack you’ll find is my ass pressed against it
The numbers are in and I’m right on your tail
You don’t have the stamina, baby, you’re frail
This will be just like ’08 when you fail
But Trump will appoint you to jail
How do I say this? You’re a two
And you almost lost the primary to a socialist Jew

What do the American people gotta yankee doodle do
To get it through your fat face that they’re just not that into you?
They want a strong male leader, who can stand up to China (China, China, China)
Not a crooked little wishy-washy bleeding heart vagina 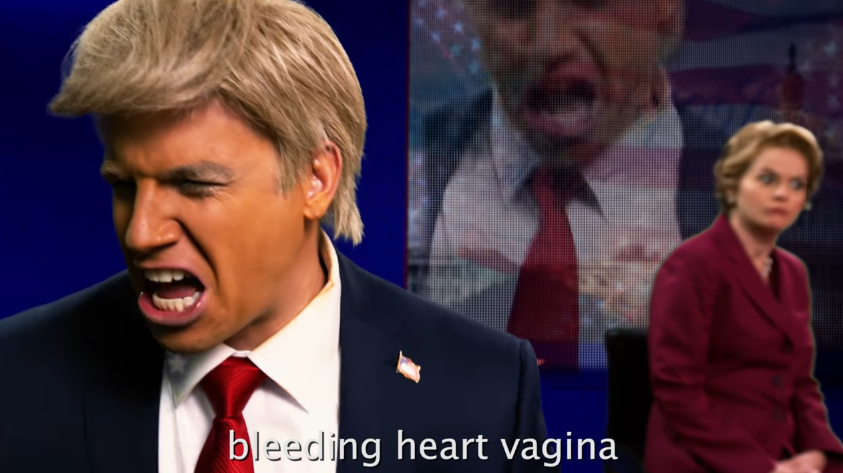 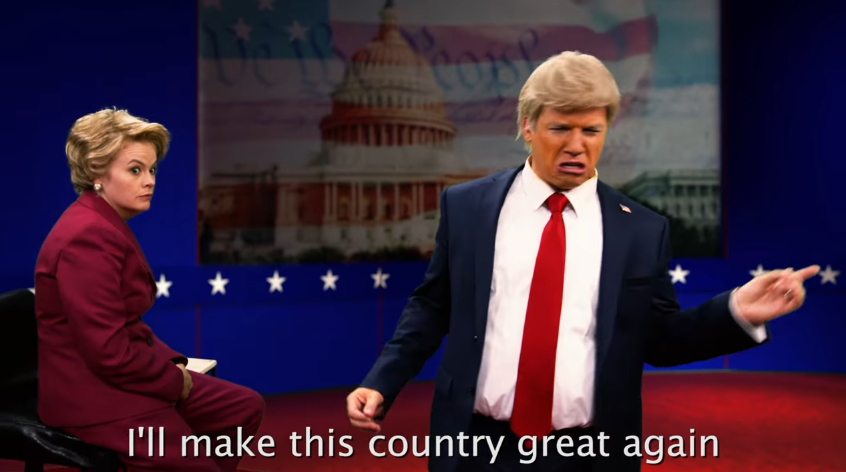 We’ll all be living large
I’ll tell Congress you’re fired and put Charles in charge
‘Cause this whole system’s rigged and we all know the riggers
For the last eight years, this country’s been run by- 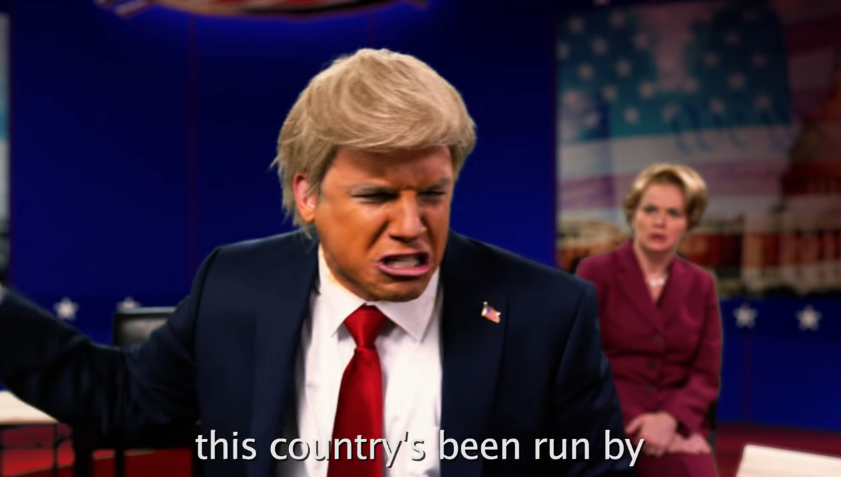 [Eagle] CAW! [Abraham Lincoln] Are you fucking kidding me with this blah blah blah? 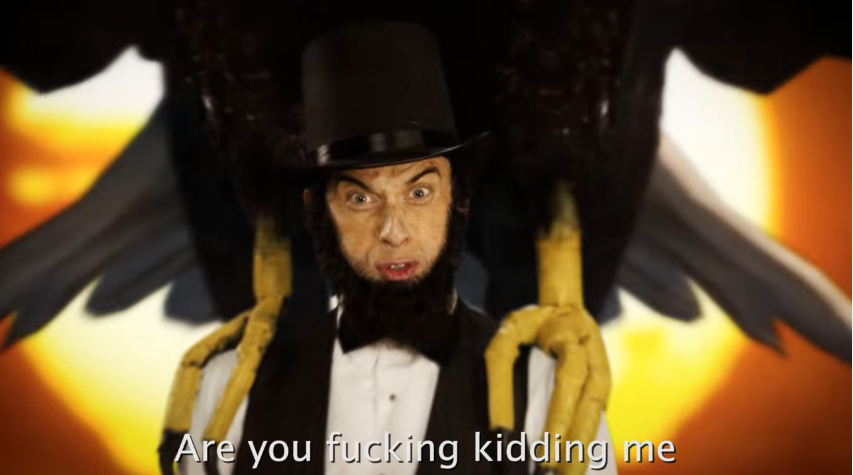 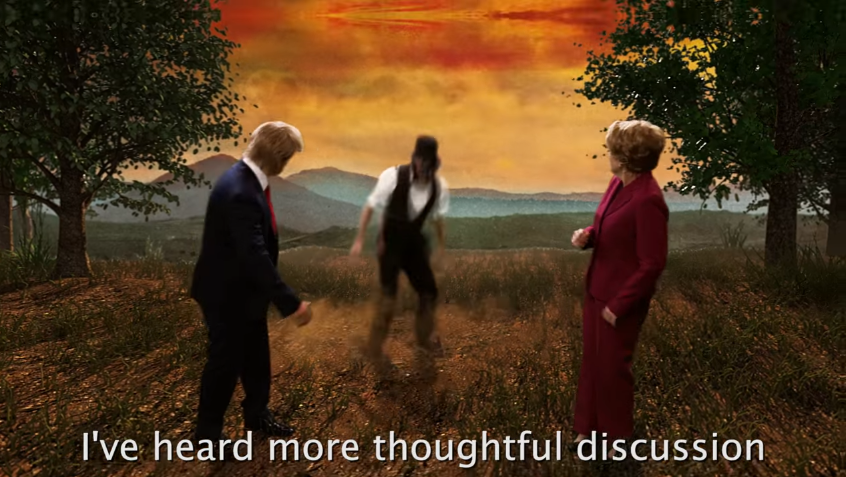 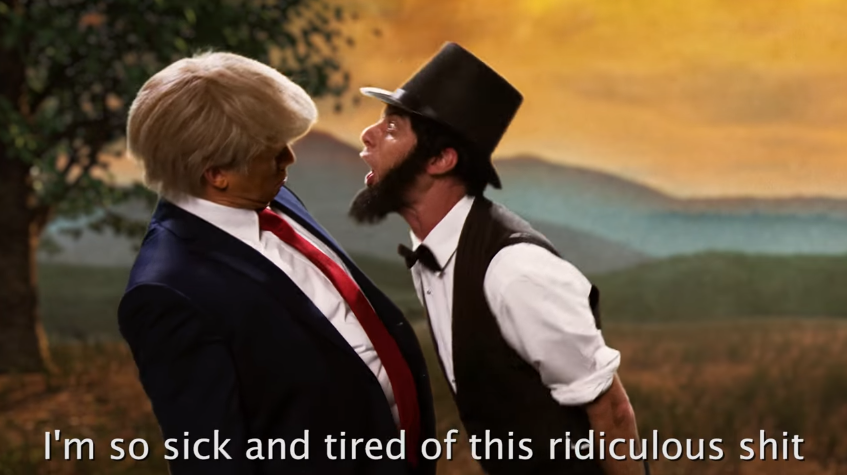 If this is the best my party gets, then my party should quit

[Hillary Clinton] Ha! [Abraham Lincoln] I’m sorry, did I say something that you found funny?
Wipe that creepy-ass smile off your face and beat this dummy!
And if she does win the White House, be a man and hold the door
Don’t get your fans stirred up in some sorta Twitter civil war
Here’s an equal opportunity smack down in the sequel
That’s of the people, by the people, for the people
EAGLE! [Eagle] CAW! [Outro] WHO WON?
WHO’S NEXT?
YOU DECIDE!